Winner! Winner! Albertsons Monopoly Game Draws to Conclusion, but It’s Not What You’ve Been Told… 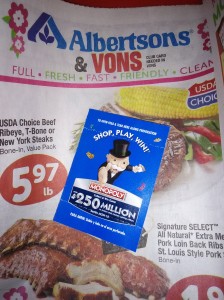 Today (7 May 2019) is the last day you can shop at Albertsons and receive free Monopoly tickets for a chance to win prizes. Winners come from more than 1 billion game tickets in play. You could win free groceries, free grocery gift cards, vacations and trips, college tuitions, consumer products of various money-value ranges from a few hundred dollars to a million dollars and cash prizes ranging from $5 to 1 million dollars and much more!

Actually, the Albertsons store I shop at is already out of tickets, so you can’t receive any more free tickets at some of the stores. See “Complaint” below.

There is much mistruth being circulated by some of the Albertsons employees, at least at the store where I shop, so that prompts this article.

I have had several Albertsons employees, including some mid-level managers, state that 7 May 2019 was the last date to redeem Monopoly tickets. That simply just is not true. So don’t throw your unredeemed tickets away. THEY ARE STILL GOOD!

The 7 May 2019 date is the last day tickets are supposedly handed out. But as stated, Albertsons have already depleted their supply a few days ahead of this date.

The online game for entering the code for additional chances to win in a sweepstake ends 17 May 2019 online or must be received by 28 May 2019 for mailed-in tickets.

Lesson learned: Don’t take people’s word for it, not even managers. DIY and study all aspects of any game you enter. It could be worth a lot of money, and if not, provide some nice little bonuses such as free items. Review all rules and regulations and all information pertaining to the games offered at a retail store or consumer outlets that you decide to participate in. Review them early and don’t wait until the last minute to act such as cashing in winning tickets since supplies could be depleted.

Can’t find your Monopoly board? No worries. You don’t need it. Besides, a website explaining the Albertsons Monopoly Game suggests collecting whole game board pieces is a waste of time and energy. All you need are the RARE GAME PIECES. RARE GAME PIECES NEEDED TO WIN BIG Links to the complete official rules and other information are also included at this site. RULES

It is suggested you review this website information since there is still time to win and cash in your winnings.

Tips:
Next year, start earlier and review the rules at the beginning of the game so you know exactly where you stand and what you need to do. Take full advantage of promos like these since they can total a tidy reward throughout the promotional season. That translates to a cash saving for your shopping budget. 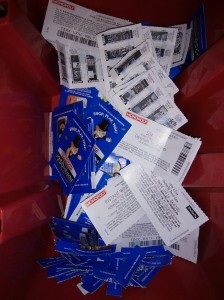 Place all of your Monopoly tickets in one place, a basket, shoebox, whatever so you can find them when you need them and they are not scattered around in clutter presenting a lost opportunity. There is nothing worse than finding a winning ticket after the game is over and the turn-in date has expired.

Don’t waste winning tickets. If you can’t use them, give them to someone who can.

You’ve got to be in it to win. GOOD LUCK!

Complaint:
When the final day of free tickets approaches Albertsons has a habit of passing out extra tickets so they are not left with leftovers. This is a bad policy since I have a stack of tickets that are instant winners for two free tickets each. I am sure many other people have these now worthless tickets, too. Any of those tickets may (or could have) provide bigger winners. Because the Albertsons store where I shop has depleted its supply I am told I could go to another store. WRONG! Albertsons should send out to whatever source they have to and honor these winning tickets and redeem them as a customer deserves. Sure, they can change the rules or put disclaimers like “while supplies last,” but they devalue their own game and reputation when they do this nonsense because they displeased their loyal customer base. Lesson learned. Don’t wait until the last day to redeem your winning tickets. But then, what if those winning tickets for free tickets were among the last handed out? Now what?

Author’s Note:
This article is from Poor Boy’s Consumer Economics Series, A Blogs & eBooks series topic. The Poor Boy’s Consumer Economics Series will soon be a publication released in Amazon-Kindle KDP eBook and print books formats with some of the discussions abbreviated, edited for blogs, revised and blogged. Poor Boy’s Consumer Economics is a value-based series of publications teaching a host of consumer economics lessons for the frugal consumer, for thrifty shopping, bargain-hunting, consumer savings tips, building an in-home food and supply storehouse, survival tips and such topics as credit building: restoring and rebuilding, buying and selling new and used cars or motor vehicles, travel tips, apartment renting, real estate and security investments, financial and banking lessons and how-to articles on unlimited subjects and much more related material from the Clifford G. Harrison DIY Freedom & Independence Library. There is also a related series called Poor Boy’s Kitchen which specializes with tips in the preparing of economic meals using a selection of cost-effective foods and ingredients. There is also much advice on home kitchens, fresh, canned, frozen, perishable and nonperishable foods, pantry and water storage to meet any or most survival emergencies, cookware and money-saving ideas in home culinary operations and food storage.

Life Is but a Card Game

IN THE GAME OF LIFE some people are beaten by their own hand. No matter how much you coach them, try to teach them, it always backfires with a certain type. It ends up the same. Just like the cards, you have to hold them or fold them. It’s hard to let go of a hand you love to hold, but sometimes that’s the only sensible choice.

When there comes a point in time when you can’t improve your hand, you can only improve your play and if you can’t do that it only leaves one thing left to do–fold your hand.

There are strict rules in every game, even if we don’t think it is a game. Life itself is a game. It’s a game rather we think of it as such or not. It is. There are winners and there are losers and there are those who will hang onto a losing hand, even if it beats them all the way to stone-cold broke. After awhile you just have to let go. It’s better to let go and wait for another hand–hopefully a winning hand–than to push the issue when the odds are stacked against you. The probability of winners against losers always favor the loser. There are far more losers than winners. And if a winner stays at the table too long, he too, is sure to lose. Life is the same way. Identically. A card game or the game of life, they’re played the same identical way. Like Kenny Rogers sang, “You’ve got to know when to hold them and when to fold them.” And if you don’t, you’re going to lose. That line is applicable in both cards and life.

Sometimes you can’t coach the player, you just have to let them play their own game and see how the chips stack up or fall. If the chips fall too many times and a player goes all in and loses, they’ll wind up broke and there will be no more game playing for them. They’ll be finished. Someone else will be playing on their dime. For some, rather playing too long at a poker table or the table of life, they wind up pushing a shopping cart on a street full of losers. Every town has at least one such street. Nearly every one on those streets have a broken heart–they lost something that was dear to them. That’s not a destiny most vision, but it’s one an awful lot of folks find themselves landing in. It’s all because of the decision of which cards to hold and which ones to fold. The cards of life come with a much higher price and a much bigger risk.